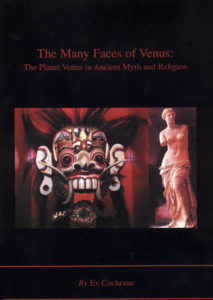 The Many Faces
of Venus

The Planet Venus in Ancient Myth and Religion, By Ev Cochrane

Inanna: The Queen of Heaven

The Planet Venus in Ancient Myth and Religion

“If we look at the physical universe the way astronomers do, we may never know anything about it. The recent U.S. planetary probes revealed a shocking paucity of real knowledge about the contents of the cosmos.”(1)G. Verschuur, “Revising the Truth,” Science Digest (August, 1981), p. 29.

The slow and steady movement of the respective planets about the sun is frequently hailed as a sign of the clock-like regularity and order which distinguishes the solar system. Yet it can be shown that this much vaunted regularity is a comparatively recent development. As we will document in the pages to follow, the ancient skywatchers describe a radically different solar system. If we are to believe their explicit testimony, recorded in countless sacred traditions from every corner of the globe, Venus only recently moved on a much different orbit, cavorting with Mars and raining fire from heaven. Is it possible that modern astronomers, in neglecting the ancient folklore surrounding the respective planets, have overlooked a vital clue to the recent history of the solar system? I, for one, believe this to be the case.

From time immemorial the planet Venus has fascinated terrestrial skywatchers, and cultures everywhere assigned it a prominent role in their mythological traditions and religious rituals. Already at the dawn of recorded history, Sumerian priests composed hymns in honor of the planet which they venerated as the goddess Inanna:

As our earliest historical testimony regarding Venus, the Sumerian literature surrounding Inanna is indispensable for reconstructing the ancient conceptions surrounding our Sister planet. Especially intriguing are those hymns which describe the planet-goddess as dominating the skies and raining fire and destruction. The following passage is typical in this regard:

“You make the heavens tremble and the earth quake. Great Priestess, who can soothe your troubled heart? You flash like lightning over the highlands; you throw your firebrands across the earth. Your deafening command…splits apart great mountains.”(3)D. Wolkstein & S. Kramer, Inanna: Queen of Heaven and Earth (New York, 1983), p. 95.

Such imagery is exceedingly difficult to reconcile with Venus’ current appearance and behavior. Indeed, scholars investigating the literature surrounding Inanna/Venus rarely make an attempt to interpret it by reference to celestial phenomena, preferring instead to interpret the vivid catastrophic imagery as the product of poetic metaphor and creative imagination. As we will document, however, the Sumerian testimony has striking parallels around the globe, in the New World as well as the Old, a telling clue that common experience of catastrophic events—not poetic metaphor—is responsible for the peculiar traditions surrounding Venus.

The planet Venus as disaster-bringer is equally apparent in Mesoamerica, where the observation and veneration of Venus amounted to a collective obsession. For the Aztecs and Maya alike, the heliacal rise of Venus was an occasion of ominous portents marked by dread and hysteria. Bernardino de Sahagun, a Franciscan friar writing in the 16th century, chronicled the Aztecs’ perception of Venus:

” And when it [Venus] newly emerged, much fear came over them; all were frightened. Everywhere the outlets and openings of [houses] were closed up. It was said that perchance [the light] might bring a cause of sickness, something evil when it came to emerge.”(4)B. Sahagún, Florentine Codex. General History of the Things of New Spain (Santa Fe, 1950-1970), Book 7, Chapter 3.

In the attempt to propitiate Venus, the Aztecs offered it human sacrifices, a practice associated with the planet in the Old World as well.

What is there about the planet Venus that could have inspired such grim rites? Venus’ present appearance would never inspire mass hysteria or vivid tales of impending doom and world destruction. How, then, are we to account for the fact that Sahagun’s testimony documenting the Aztec’s attitude towards Venus echoes the Sumerian skywatchers’ conception of Inanna/Venus: “To provoke shivers of fright, panic, trembling, and terror before the halo of your fearsome splendor, that is in your nature, oh Inanna!”(5)F. Bruschweiler, op. cit., p. 118, with reference to A. Sjöberg, “in-nin sà-gur4-ra. A Hymn to the Goddess Inanna…,” ZA 65 (1976), line 161.

In this book we will seek to discover the historical circumstances and logical rationale behind the ancient mythology attached to Venus. To anticipate our conclusion: Venus was associated with dire portents and tales of apocalyptic disaster for the simplest of reasons—it was a primary player in spectacular cataclysms involving the Earth in relatively recent times, well within the memory of ancient man.

The implications of this theory, if true, are at once revolutionary and far-reaching. In addition to necessitating a drastic revision in our understanding of the historical determinants of ancient myth and religion, the central tenets of modern astronomy and a host of allied sciences would be called into question as well. With stakes this high, it is imperative that we endeavor to gain further insight into the origins of ancient Venus lore.

The ancients’ obsession with the planet Venus stands in marked contrast to the relative indifference currently accorded our nearest planetary neighbor. Who among us could even point out the Evening Star on any given night? Would anyone in their right mind be inclined to view Venus as an agent of destruction and impending doom?

David Grinspoon, a NASA astronomer and the author of a very entertaining history of Venus observation, offered the following summary of the ancients’ preoccupation with Venus:

“Venus must always have seemed a unique, animated entity. For our ancestors the details of the complex movements of Venus served as important harbingers of war and peace, feast and famine, pestilence and health. They learned to watch every nuance for the clues they could wrest of what nature had in store. They watched carefully, obsessively, through skies not yet dimmed by industrial haze and city lights, and they learned to predict accurately, for years and decades to come, the rising, setting, dimming, brightening, and looping of Venus.”(6)D. Grinspoon, Venus Revealed (New York, 1997), p. 17.

Confronted with Venus’ prominent role in ancient consciousness, Grinspoon, like countless others before him, seems to take it for granted that it is only natural that the ancients would look to that particular planet for omens of things to come. But why should this be, since there is neither an inherent nor logical relation between Venus and the phenomena mentioned by him—war, pestilence, fertility, etc.? Indeed, it stands to reason that any ancient skywatcher worth his salt would soon discover that there was precious little to be learned about such terrestrial matters from the patient observation of Venus. That is, of course, if we are to believe the conventional version of Venus’ history, which holds that the planet’s appearance and behavior has hardly changed for millions of years.

In recent years, modern astronomy has made great strides in removing the veil which had previously obscured the physiognomy of Venus. For the first several centuries of telescope observation it was commonly believed that Earth’s so-called twin was home to beings like ourselves, complete with a thriving civilization.(7)Ibid., pp. 31-39. Until the midpoint of the present century it was still thought possible that Venus might be “Earth-like” in its features, with a tropical climate, vast oceans and swamps teeming with various forms of life.(8)Of Ray Bradbury’s story “The Long Rain,” which describes Venus as an “Earthlike, rain-soaked, heavily vegetated jungle world,” Grinspoon, op. cit., p. 31 says that it was “consistent with common scientific beliefs of the day”—i.e., 1951. Yet all such geocentric scenarios were to receive a severe jolt in 1962 when, courtesy of Mariner 2, Venus was revealed to be a most inhospitable place, with surface temperatures in excess of 900 degrees Fahrenheit. Under such conditions, oceans (of water, that is) are quite out of the question and life, as we know it, almost unthinkable.

The recent history of the scientific investigation of Venus reveals a vast theoretical graveyard of discarded hypotheses, false deductions, erroneous premises, shoddy observations, and wishful thinking.9 While many astronomers, Carl Sagan among them, expected the Venusian clouds to be composed of water, Mariner (9)For a survey, see D. Grinspoon, op. cit., pp. 40-45. found precious little water and plenty of concentrated sulfuric acid. Where leading astronomers “observed” luxuriant Venusian vegetation in full bloom, modern space probes discovered a barren, desiccated wasteland.(10)Ibid., p. 51. Indeed, if the truth be known, the Mariner, Magellan, and Pioneer missions have forced astronomers to radically revise their previous assessments as to Venus’ origin, nature, and geological history. On virtually every major feature of the Venusian landscape and atmosphere, the astronomers’ theoretical expectations have been proven wrong time and again. And wildly wrong at that. Given this dismal track record, there would appear to be some justification for maintaining a healthy skepticism with respect to astronomers’ current “best guesses” as to what is possible regarding Venus’ recent history. Indeed, as we will document, there are good reasons for believing that other—even more radical—revisions in our understanding of Venus are in order.