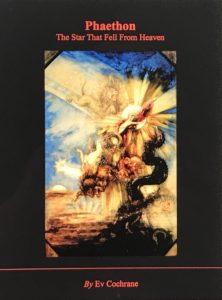 Phaethon: The Star That Fell From Heaven

Just Published (2017). A comparative study of the Greek tale of Phaethon. The central thesis holds that the Greek legend describes a catastrophic episode in the recent history of a neighboring planet.

(Preface as a PDF)

“This myth [Phaethon’s], at its core, recapitulates virtually everything that is essential to know about the ancient Greek hero.”(1)

“Myth seems to lend itself particularly well to the phenomena of astronomy, the most ancient and sacred of the sciences.”(2)

Phaethon’s incendiary joyride in his father’s chariot—followed by his spectacular fall from the celestial heights—has captivated countless generations of Earthlings ever since it was first set to poetry by the likes of Aeschylus, Euripides, and Ovid. The origins of the story, or how it is to be explained from the standpoint of natural science, remain a subject of seemingly endless speculation and controversy. The present monograph intends to reopen the question over origins by offering a cross-cultural analysis of the Phaethon-theme.

Like a Siren’s call from a distant time and wholly foreign world, the testimony of ancient myth continues to exert a strange fascination over modern man. Whence derives the power of myth to inspire great art and move the emotions? The question most germane to the present inquiry, perhaps, is the following: Why should anyone take an interest in the astronomical details encoded in ancient myth?

For countless generations before the origin of advanced civilization, myth served as the primary medium for recording and communicating mankind’s most basic and cherished beliefs regarding the history of the world and the nature of the cosmos. During this immense span of time every tribal community had, as it were, its own Homer or Hesiod who, reciting from an iron-clad memory, “sang” or otherwise recounted the local account of Creation. It is in this sense, then, that ancient myth represents a mnemonic treasure trove documenting the intellectual history of our forebears and, as such, it forms a rich vein of study for all serious students of human psychology, religion, and natural philosophy. And if it should also prove to be the case that ancient myth preserves important information regarding the recent history of Earth and the ambient solar system—our primary thesis in four previous volumes—its study becomes all the more essential and rewarding.

The advent of civilization had a profound influence on the precise means and manner by which the archaic myths were transmitted. With the development of writing and other graphic systems capable of preserving sacred traditions, storytellers gradually ceased to perform such a vital function in their rapidly evolving cultures. The great myths, hitherto committed to memory and transmitted orally from one generation to the next, now became the common possession of anyone who could read and had access to the requisite texts. At the same time, the sacred traditions became increasingly susceptible to the vicissitudes of cultural evolution and the corresponding modifications that inevitably arise from the attempt to historicize and localize the events in question. Despite the great care with which the ancient manuscripts were copied, errors gradually crept in over the centuries. As memories faded, and as sacred traditions became subject to ever-increasing adaptation and abridgement, the ancient scribes struggled to understand the message that had been bequeathed to them by their ancestors. Thus it is that, for the past several thousand years, scholars and like-minded exegetes have sought to deduce and recover the basic message of the Iliad, the Rig Veda, the Torah, and the Pyramid Texts, albeit with mixed results.

From this author’s vantage point it is extremely unlikely that a valid reconstruction of the mythological testimony will ever result from the study of any one particular cultural tradition or literary record. Rather, a better strategy would be to compare the different cultural traditions and attempt to reconstruct common thematic patterns—those telling of a Deluge, dragon-combat, or hieros gamos, for example. Should any such recurring thematic patterns be found—and such patterns abound, in fact—this would naturally increase our confidence in the fundamental veracity and informational content of the respective mytho-historical records.

How, then, are we to explain the recurring thematic patterns in the mytho-historical record? It is our opinion that this question is best addressed by subjecting the different reconstructed patterns to rigorous analysis and then cross-checking the results against the evidence of the physical sciences in order to form a working hypothesis regarding the probable natural history behind the respective mythological traditions. This strategy, in fact, has long formed the cornerstone of the mytho-historical analysis practiced by this author.

Until recently, the study of ancient myth has been given short shrift by modern scholars in general and all but ignored by mainstream science. The present book is an attempt to reinstate the importance of mythology as a reliable witness to ancient history. It is our view that the key to reconstructing the history of the world and the fundamental meaning of the central themes of myth and religion has always been right before our eyes. Yet for one reason or another, historians and scholars have been inclined to ignore it.