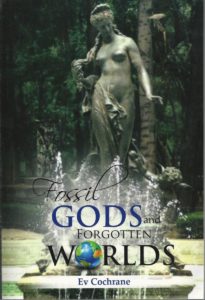 The Great Gods of yore have long since fallen silent. Yet for countless millennia prior to their eclipse they loomed ominously in the heavens above, their thunderous voices being enough to raise hackles on the bravest warrior. Fossil Gods such as Horus, Thor, and Inanna were awe-inspiring and omnipresent powers, impossible to ignore or forget. That said, such names are familiar today only to a small cadre of scholars specializing in ancient cultures.

It is no longer fashionable to give much credence to the seemingly far-fetched myths and legends attached to the Great Gods. Indeed, the mere concept of “myth” has become so debased that it now passes as a virtual synonym for fiction or fantasy. Yet this development is as recent as it is myopic and misguided. Since the Dawn of Time itself myth provided the primary source of information for how the world came to be as it is—not to mention a divinely ordained instructional manual for how to live an honorable and meaningful life. In this sense ancient man lived in accordance with Thomas Mann’s famous dictum:

“Life, then—at any rate—significant life, was in ancient times the reconstitution of the myth in flesh and blood; it referred to and appealed to the myth; only through it, through reference to the past, could it approve itself as genuine and significant. The myth is the legitimization of life; only through and in it does life find self-awareness, sanction, consecration.”(1)

A proper reading of the historical record will show that ancient man’s entire life revolved around the seemingly obsessive attempt to honor and appease the Great Gods, whether through the construction of mountain-like ziggurats or by offering human sacrifices. Countless rites were designed with the express purpose of emulating or commemorating the celebrated deeds of the Gods, their neglect or improper performance being punishable by death.

How are we to explain ancient man’s collective obsession with the comings and goings of the Great Gods—much less the mysterium tremendum et fasclnosum(2) evoked by their tumultuous fulminations from on high? For one reason or another, ancient man seems to have been fixated on observing the Great Gods and chronicling their extraordinary behavior—their peculiar births, uncanny metamorphoses, and innumerable love affairs. Why this should be the case has long been a puzzle and remains enshrouded in mystery to this very day. The answer, or so we have proposed in several monographs on the subject, is that ancient man actually witnessed the trials and tribulations of the Great Gods firsthand—this despite what we think possible nowadays. Indeed, a review of the evidence will reveal that the ancients were the traumatized survivors of truly extraordinary and devastating cataclysms involving various planetary bodies, the latter constituting the Gods themselves. Being at once life-threatening and strangely beautiful, the catastrophic events dominated the celestial landscape and were utterly mesmerizing. Indeed, it is precisely because the planetary cataclysms were so traumatic and fascinating that they were duly recorded—often in striking and painstaking detail. Upon being committed to memory, the events in question were eventually encoded in myth and endlessly celebrated in public celebrations and ritual reenactments. The unfolding celestial drama, properly reconstructed, is nothing less than the history of the Gods.

Like the fossilized bones of great dinosaurs revealed by a retreating riverbed, the testimony regarding fossil Gods provides telltale evidence of lost worlds and world-engulfing catastrophe. In this sense our work of historical reconstruction is not unlike that of a paleontologist, who seeks to deduce and reconstruct the biological record from a mere handful of scattered bones and teeth. Considered in isolation and without regard for historical context, no one bone or tooth can ever be conclusive. Rather, it is the comparison and analysis of detailed structures from around the globe that offers the most compelling evidence for the seemingly fantastic monsters that once ruled the earth. And the same logic and methodological rationale offers the surest guide for reconstructing the Great Gods who only recently dominated the sky. By revisiting and analyzing the abundant mnemonic structures attested in ancient myth and ritual, On Fossil Gods and Forgotten Worlds attempts to shed some much needed light on the dramatic celestial events encoded therein—events that literally shook the world while exercising a decisive and formative influence on cultural institutions around the globe.

“But if the content of myths only consisted in these objective, transposed elements [i.e., kinship relations in ancient societies] of nature or culture, it would be impossible to understand how and why myths are what they are: an illusory representation of man and the world, an inaccurate explanation of the order of things.*

The Central Dogma of modern astronomy holds that the respective planets have orbited the Sun with near perfect regularity for untold millions of years. Far from being an obscure scientific doctrine of interest to only a few eggheads in the proverbial ivory tower, the Central Dogma—together with its theoretical alter ego uniformitarianism—serves as the philosophical foundation for much of what passes for modern science (the latter doctrine holds that familiar and regularly occurring natural processes govern geological change—on Earth as throughout the solar system). If this belief-system is valid, the present book is worthless as a credible reconstruction of history. Yet if the Central Dogma is invalid, as argued here, virtually everything you read in modern textbooks with regards to astronomy, cosmology, and Earth history becomes obsolete or requires substantial revision.

Truth be told, the verdict is already in: The Central Dogma is dead. Each chapter in the present book provides a wealth of evidence that serves to throw more dirt on its rapidly decomposing corpse. As we have documented, the Earth’s true history is far more interesting than we have been led to believe—stranger, in fact, than the strangest tales of science fiction. Properly reconstructed, it is a history of lost worlds and planetary Gods gone amok. In short, it is a history punctuated by extraordinary catastrophes that convulsed and reordered the immediate solar system while forever changing human behavior and cultural institutions around the globe.